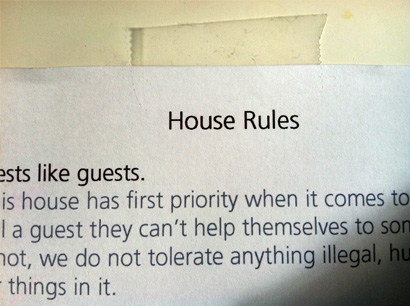 I have had teens for a few years now, and if you have small children, I will tell you, things really don’t slow down one bit. In fact I think they speed up. And it really does seem like five minutes ago these giants were toddlers. One day, you look around and realize there are all kinds of things that somehow you forgot to tell them.

The good news is, it is never too late to talk to your kids. And a great way to do it is to post some House Rules. Now, these rules will vary widely depending on the ages of your kids, and what’s going on at the moment. So it’s not a bad idea to see this as an ongoing thing. Maybe renew the rules each year at the same time, like school’s end.

I came across this idea when we were having what I felt was an uncomfortable dialog at the dinner table one night. Sometimes we buy different snacks for each kid to take in their lunches. One kid’s bag of chips was raided by another kid’s friend who was over. And Kid #1 was grousing about it to kid #2. I knew the discussion was making me uncomfortable but I couldn’t quite put my finger on why. Then it occurred to me. Our house is supposed to be one of grace and cordiality. I would not expect a kid to tell their friend they can’t snack on something any more than I would be rude to one of my guests. And my feeling was fundamental enough that I felt I should declare it in writing. These kids were almost old enough to fly the coop–how could they not have picked up this oh-so-basic doctrine? Instead of ruminating on that one, I just posted the rules.

When I began addressing the first issue, I thought of others that bared recognizing at this juncture. But I felt the need to keep it short. Four rules. As it turns out, we have not had to renew or revise the rules yet. But if and when we do, they will be amended.

Here are our House Rules, that I printed out and taped to the kitchen cupboard. Yours will probably be different. But I will say that I’m glad I spoke up. And every one of my family members, including my husband, thanked me for doing so.

1. We treat guests like guests.
Any guest in this house has first priority when it comes to sharing. No one is obligated to tell a guest they can’t help themselves to something. At the same time, guest or not, we do not tolerate anything illegal, hurtful, or damaging to the house or things in it.

Example: Someone is drinking a liquid near the piano. Please say: My mom will kill me if we have liquids near the piano, drink it over here.

Example #2: Guest is munching on a snack that you realize belongs to someone’s lunch. Rather than actually taking it out of guest’s hand, apologize (LATER) to sibling. Note: In future, mark all lunch stuff as such so any dummy can see that it’s off limits. And stow it somewhere that’s not right out there in the open. Do not force your family mates to be the food cop around their guest. It is totally not cool.

Example #3: Guest thinks it would be a good idea to find and drink alcohol in the house. Tell guest that is SO not happening.

2. Respect others and yourself.
Think for a half second before you say or do something. How would that sound or feel to you?

Example: The kitchen is clean. You create a new mess. Clean up after yourself.

Example #2: The kitchen is kind of a mess. You add a little to the mess. Now, before you leave the scene, clean up not just your mess, but some or all of the previous mess. Others have done it for you plenty of times. Just a little hint of what it’s like being a grown-up.

3. Always call for a ride. If you are in any kind of trouble, call us. If you think there may be trouble, walk away and call us. Do not ever drive drunk. Do not ever get in the car with a friend who thinks (s)he can drive drunk. Don’t buy into your friends saying you’re better off not going home. You are always better off coming home. And we will vow to keep that promise.

4. Act, live and speak with love in your heart. It shows.

This entry was posted on Monday, May 28th, 2012 at 4:24 pm and is filed under 05 May, Home, Inspiration, Kids, Philosophy. You can follow any responses to this entry through the RSS 2.0 feed. You can trackback from your own site.